Drive By Fake Virus Warnings are web pages that take over your computer / browser and lock it until you call the number they display. Sometime these warnings will use your speakers to announce the problem. If you play the video you will see one of these in action.

Signs it is a Fake Warning:

Some of the “Fake” attributes are:

What to expect if you call

They instruct you to call the number on the screen to resolve the issue. If you do call, you can expect the following: 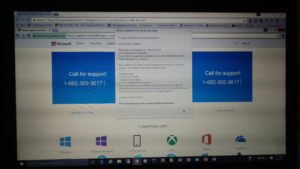 The solution in most cases is simple:

Just like your computer,  Web sites get hacked and infected. An infected site can redirect you to the pages that will give this alert.

It was determined to be a fake based on several factors:

Remember these type of attached are designed to get information or Money from you.

If you are in doubt, power off the phone, then restart it and see if the message comes up again. Unless you have installed antivirus on your phone I do not know of any Carrier or Operating system provider to give these alerts. 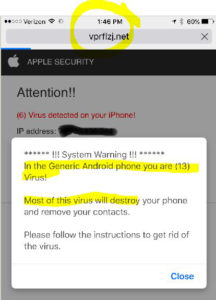 Potentially Dangerous Downloads from the internet are one of the biggest risks for your computer to be infected with malicious software or viruses. The problem happens when users download what they think are “Good” programs, but the bad guys have taken the “Good” program and added their infected program as an free “bonus”.

Sometimes during the install installation, the license acceptance screens will advise that other programs are being installed, but people are so used to clicking Yes or Continue or Next, the bad stuff gets installed along with the good program.

Another problem can be “fake” programs that do damage. One of the most faked or corrupted programs is Adobe Flash Player. If you download it from some sites, it will install an infected version that can do damage. Always be careful that you are downloading the program from the original source. Adobe Flash and Shockwave should be downloaded from Adobe.COM.

Here is an image of a typical fake Adobe Flash Warning.
Note the Page at download.adobeoo is not a real adobe site. It may or may not be listed. 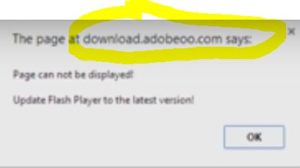 When you click the OK to get the new file, notice the URL at the top left is still a fake: 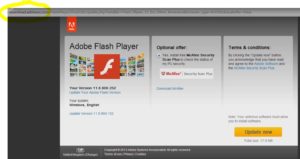 Even though it looks real if you download and install from here you are installing Malware/ virus on your computer. NOTE THAT THIS AFFECTS MAC’s and PC’s alike.

IF YOU THINK YOU NEED TO UPDATE YOUR ADOBE FLASH PLAYER OR ADOBE SHOCKWAVE PLAYER GO TO ADOBE.COM AND DOWNLOAD IT FROM THERE. It will typically be listed at the bottom of the page

There are also fake Java alerts as well

If you see that type of message when visiting a web site, you should close your browser and then go to java.com and update it from there.

Better to take 5 minutes and make sure you are getting the right stuff, than risking downloading something that may infect you computer and possibly cause you to lose your data.

Home buyers are in danger due to a huge scam taking place in the buying/ selling of real estate. The scam has gotten to a level now that many real estate agents and lawyers are having buyers and sellers sign warning notices of the potential of wire fraud and that they should NEVER send any money via wire based on an email only.

Links that may be of interest.

This is from Reese Nichols, a real Estate firm in Kansas City. Video with Warning

And finally a simple Cartoon video that does a really good job of reviewing the how its done and how to avoid it.

Beware of Phishing attacks. e-mails that look like they are coming from reliable sources, but ask you to change passwords, or put in security information are mostly not legitimate. The links take you to sites that may look real, but are hosted and controlled by the “bad guys”. If you want to change your password, go to the site you normally log into and change it from there.

Read carefully any emails that you get. If they are “mostly” right, but some of the language or wording looks odd, it is likely bogus.

DO NOT open any attachments from unknown senders or unexpected emails. These often include leading statements such as

To See What user Turned off Server follow the following steps:

Sometimes a server may go down and you want to determine what user shut it off. It may be in the case of a Remoted Desktop Server where you allow users to have the ability to shut down the server. If this happens you may need to find out What user Turned off Server? 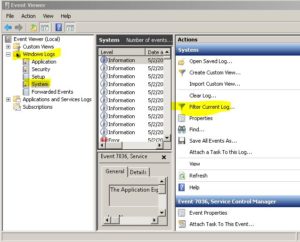 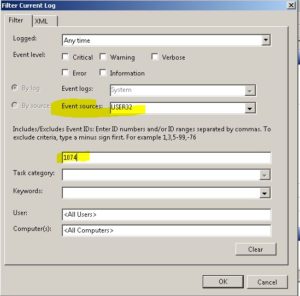 This will give the list of Power off and restart events. It will have the date and time as well as Username. 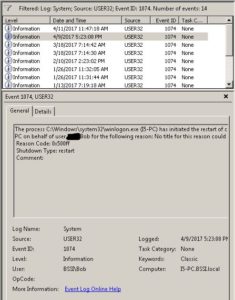 How much will it help? According to Google it will not count nearly as much as good content, It will be one of the minor factors (along with about 200 other factors Google uses to rate web site).

For these reasons, over the past few months we’ve been running tests taking into account whether sites use secure, encrypted connections as a signal in our search ranking algorithms. We’ve seen positive results, so we’re starting to use HTTPS as a ranking signal. For now it’s only a very lightweight signal — affecting fewer than 1% of global queries, and carrying less weight than other signals such as high-quality content — while we give webmasters time to switch to HTTPS. But over time, we may decide to strengthen it, because we’d like to encourage all website owners to switch from HTTP to HTTPS to keep everyone safe on the web.

Here are some basic tips to get started:

If you are interested in getting SSL Certificates for your site, you can get them here, or you can contact us and we will help you get and install the certificate.

The Internet Explorer Security Flaw has been in the news lately and to help you, we are posting some comments as well as downloads to fix these issues. First is the threat real? Yes it is a real threat, but Is the threat overblown?

Yes in our opinion the threat was overblow by the news media.
It was a real risk, but in order to be at risk, you had to be using Adobe Flash which we do not recommend using unless it is necessary (it is used on some sites for graphics or animation).  Secondly you then have to visit a site that was compromised (hacked into) by the bad guys.

So in our opinion it was a relative low risk for business related internet business. Having said that we also do recommend that you update your PC’s to the newly released patches by Microsoft. The easiest way to do this is to have the automatic updates turned on and it will be applied automatically (if it has not already been applied).

The second easiest way to do a one time update of your system by following the instructions here. This will install ALL of the current updates to your system and may take some time with rebooting. After each install/ reboot, you should check if there are any more updates to be applied. Often you have to install some updates before the newer ones will install.

For those of you that want to download and install it yourselves, it is a bit confusing as it depends on both the Internet Explorer version you are on as well as the Operating system you are running. In total I am listing here 12 possible combinations, but bear in mind that there are also patches for different server operating systems and I have not included Windows Vista or any server operating systems.

First if you are running Windows 7 you have to be sure to apply a previous Internet Explorer update first. If you do not, you run the risk of things not working after you apply the update.

First Install the previous update to be sure it is installed 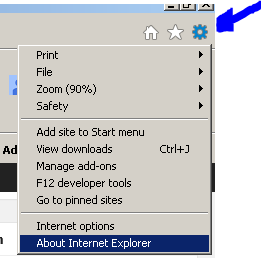 Based on knowing your Operating System Information and the Internet Explorer version, download and install the correct version from the list below.

And finally for Windows 8

Windows 7 Manual Update is often used to force new updates to be applied if the automatic update feature is turned off. To perform a manual update, click on the start button, then go to All Programs

and then Choose Windows Update

You can click on the Check for updates button, or if nothing is found, also try the Check online for updates from Microsoft Update (highlighted in yellow below)

What does Windows XP End of Support (EOS) mean? In the software industry, companies put software in the EOS category after a period of time when there are more current versions and the manufacturer does not want to support the older (EOS) versions. In the case of Windows XP this means that Microsoft will no longer be putting out updates (either security or bug fixes) for Windows XP. It also means that Microsoft and most other software vendors will not longer test new products with XP to assure compatibility. It does not mean that Windows will stop working or that your are “Forced” to upgrade. You can continue to use XP on your current machine as long as you like.

How Will I be Effected?

What should I do?

Unless you have a legacy application that requires Windows XP, you should be looking at upgrading from XP. The reasons are:

Most people will want to go to Windows 7. Windows 7 is a small jump from XP and maintains the same menu/ start button. If you are willing to take on a steeper learning curve Windows 8 does have some benefits, but also can be frustrating at the beginning. We can still get Windows 7 Pro pre installed on desktop and notebook PC’s starting as low as $500.

Questions? As always, if you have questions or concerns, Contact Us.